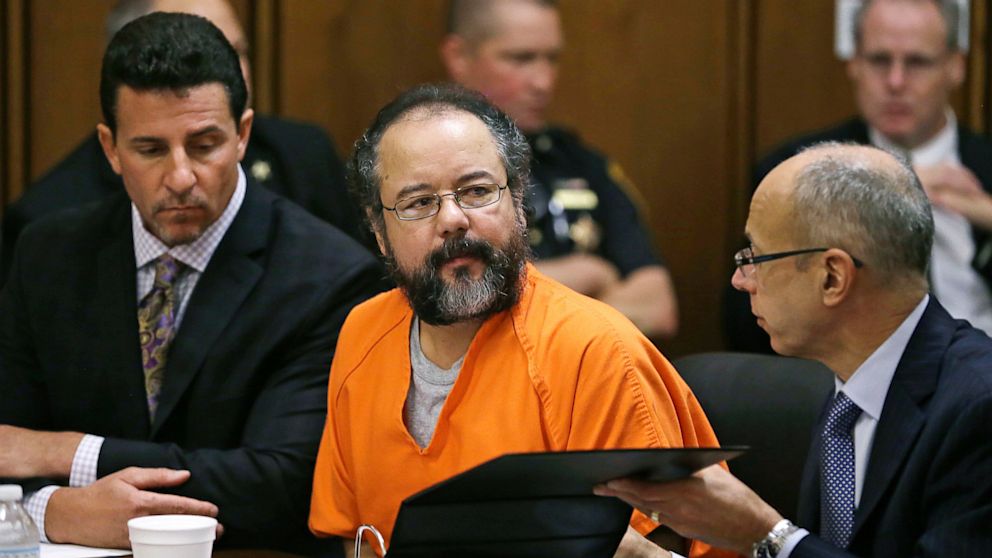 Ariel Castro, who was convicted of kidnapping, torturing and imprisoning three young women for over a decade in his Ohio home, committed suicide by hanging in his prison cell. He was characterized as a degenerate and a coward by the prosecutor from his case.
"These degenerate molesters are cowards," Cuyahoga County Prosecutor Timothy McGinty said in a statement. "They con and capture vulnerable children. This man couldn't take, for even a month, a small portion of what he had dished out for more than a decade."
"Let this be a message to other child kidnappers: There will be a heavy price to pay when you are caught," he said. "You won't enjoy the captive side of the bars."
See the Evidence from the Ariel Castro Kidnapping Case
Castro, 53, died after being found hanging in his cell at Correctional Reception Center in Orient, Ohio, Tuesday at 9:20 p.m. local time, Ohio Department of Corrections spokeswoman JoEllen Smith said.
Facility staff tried unsuccessfully to resuscitate the prisoner, according to Smith. Castro was taken to Ohio State University Medical Center and was pronounced dead at 10:52 p.m.
Autopsy results showed that the death was a suicide by hanging, Franklin County coroner Dr. Jan Gorniak told ABCNews.com today.
"The autopsy findings and the ligature that I was shown, it's consistent with a bed sheet," Gorniak said of the manner in which Castro committed suicide.
She did not know provide details of how he was found.
His room was an 8 by 12 cell with a bed, urinal, sink, shower stall and writing surface, according to the Ohio Department of Corrections. Inmates are also allowed to have some personal property if they are not on any type of disciplinary probation.
"Inmate Ariel Castro was found hanging in his cell this evening at 9:20 p.m. at the Correctional Reception Center in Orient. He was housed in protective custody which means he was in a cell by himself and rounds are required every 30 minutes at staggered intervals," Smith said in a statement.
Castro was not on a suicide watch, which would have required constant observation.
"A thorough review of this incident is underway and more information can be provided as it becomes available pending the status of the investigation," the statement concluded.
A public relations company that has represented Michelle Knight, Amanda Berry and Gina DeJesus said that Castro's former captives will not be commenting on the matter.
DeJesus' brother told ABC News that they are aware of Castro's death and are all doing okay so far.
Castro's attorney Jaye Schlachet told ABC News' Cleveland affiliate WEWS-TV that the defense team had requested for a forensic psychologist to evaluate Castro when he was in the county jail and the state's prison reception center.
"Local and state authorities denied our requests," Schlachet said in the statement. "There is an institutional failure beyond Ariel Castro and the citizens of Ohio are entitled to something better. It's just sad."
Cleveland Mayor Frank Jackson said focus should remain on the survivors.
"Our focus remains on the well-being of the survivors of Seymour Avenue," Jackson said. "It is our sincere hope that they will continue to heal and recover. I ask the community to continue to respect the privacy of the survivors so that they can move forward with their lives."
Posted by GOT DAT MUSIC