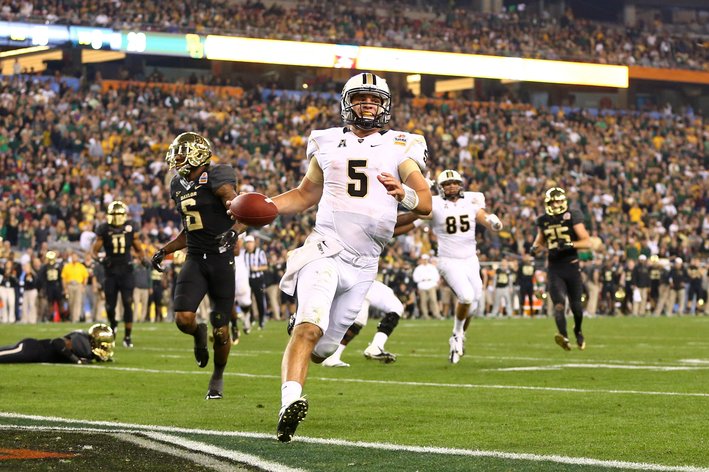 Making its first appearance in a BCS bowl game Central Florida upset Baylor, 52-42, in Wednesday night's Fiesta Bowl. The No. 15 Knights were 17-point underdogs at kickoff, the largest margin ever overcome in a BCS bowl game, yet led the No. 6 Bears by 17 in the fourth quarter until allowing a touchdown with a minute left in the game.

College football's money-printing postseason will soon have a new name and a new format. But let's pretend the last official week of the Bowl Championship Series is also the birth of something new.
UCF did it behind a pair of stars on offense. Quarterback Blake Bortles' ran and passed for 394 total yards and four scores, and running back Storm Johnson added 124 yards rushing and three touchdowns of his own. Between the two, they racked up 518 of the Knights' 556 yards.
The Knights jumped on the Bears early, posting two quick touchdowns to take a 14-0 lead before Baylor quarterback quarterback Bryce Petty got his team on the board late in the first quarter.
The second quarter was a mess of turnovers, blown coverages and sloppy offense. After the teams exchanged punts, Baylor was stopped on fourth down at the UCF 33-yard line when Petty fumbled the snap.


Bortles responded by throwing an interception three plays later, but Baylor could not capitalize. Bortles threw his second interception on the next play, and this time the Bears were not so magnanimous. Petty connected with Levi Norwood on a 30-yard touchdown, though the extra point attempt failed. Johnson fumbled the ball back to Baylor on the next play, the third consecutive UCF snap to end in a turnover. This time, however, the Bears were in the giving spirit: Petty threw an interception into the UCF end zone, and Bortles turned it into a 50-yard touchdown pass five plays later.
Baylor took over at its own 22, and embarked on an eight-play, 78-yard touchdown drive capped when Petty scrambled right, dove for the end zone, and took a hit from a UCF defender.
The teams exchanged punts to start the second half, but Baylor struck first. Petty ran in his third touchdown of the night from the goal line, then ran in the two-point conversion, to finish a 68-yard series and tie the game at 28. Bortles and the Knights responded with a touchdown drive of their own, with Bortles throwing to Breshad Perriman to restore the UCF lead. Six minutes later, Bortles ran for another score, extending the Knights' advantage to two touchdowns early in the fourth quarter.

Baylor was not going quietly, though. It took the Bears just four plays and 81 seconds to score again, highlighted by Petty's 28-yard completion to Clay Fuller to set up a Glasco Martin 9-yard touchdown run. But when Johnson broke a 40-yard touchdown run just minutes later to restore UCF's two-possession lead, what little momentum Baylor held evaporated. Two penalties short circuited Baylor's next drive, the Bears were forced to punt, and Central Florida bled the clock below the 5:00 mark before kicking a field goal to go up, 52-35. Baylor put together a late scoring drive to narrow the UCF margin, but it was too little, too late. Central Florida fielded the onside kick, and the upset was complete.
Box Score Hero: Bortles completed 20 of 31 attempts for 301 yards and three touchdowns. He also ran eight times for 93 yards and a score. Johnson's 124 rushing yards cannot be ignored, though, nor can Hall's four catches for 113 yards and two touchdowns.
Rankings Ramifications: Baylor, which entered the game ranked No. 6, will drop with the loss, while Central Florida could well move into the final Top 10. It's an incredible accomplishment for a program that only moved into FBS football in 1996 and did not join a BCS automatic qualifier conference until this season.
Posted by GOT DAT MUSIC

Email ThisBlogThis!Share to TwitterShare to FacebookShare to Pinterest
Labels: news