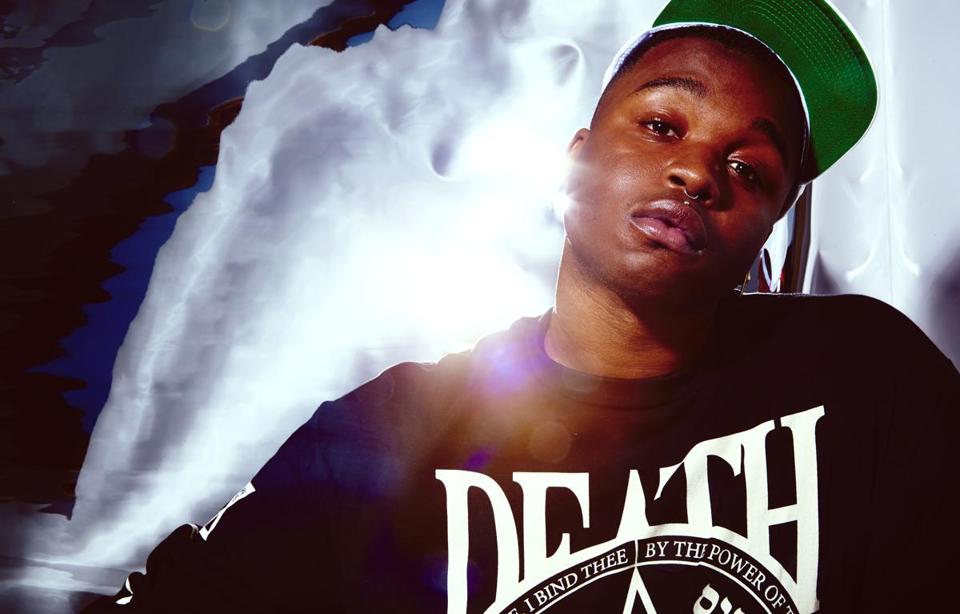 The undercurrent of homophobia in hip-hop has been well documented — the history of homophobia in everything, come to think of it. But much as we’ve seen in the culture at large in recent years, the tide has been turning in the world of hip-hop too, with avant gay New York rappers Mykki Blanco and Le1f garnering significant buzz, and Houston’s Fly Young Red scoring a recent viral smash.
Also breaking new ground in the traditionally hyper-masculine and hetero-normative genre is Rashard Bradshaw, 23 (pictured at left), an artist from New Jersey who goes by the name of Cakes da Killa. He’ll perform at the June 6 launch party for Boston Pride Week at Club Oberon in Harvard Square.
The recent boom in gay rap is absolutely refreshing, says Nathanael Bluhm, a.k.a. Begbick, organizer of the event, and resident DJ at Controversy, a twice-monthly party at Machine that focuses on Caribbean, dance hall, and hip-hop club music. Bluhm and DJ Leah Mcfly will also perform on Friday.

“Hip-hop has a history, maybe not in the last five years, but certainly 10 years ago with Eminem or whatever was popular at the time, of there being quite a bit of homophobic content,” Bluhm says. “I don’t think it’s as pervasive today, but you had a lot of real vitriol there.”
Much like everyone else, he says, and this should come as no surprise, “gay people love hip-hop. We’re in the clubs, we’re everywhere, there’s no distinction in what we’re listening to necessarily.” Unfortunately, Bluhm adds, “there has been a lack, especially in Boston, in spaces for gay people to dance to hip-hop and Caribbean music.” That’s where parties like this one and Controversy come in. “Hey, God bless Cher,” he adds, “but we don’t all want to hear Cher and Katy Perry remixes all the time.”
Cakes Da Killa’s music is a long shot from Katy Perry, but it fits pretty seamlessly onto any contemporary hip-hop playlist. On “Truth Tella,” Cakes comes hard over a creeping harpsichord loop and eerie synths. “Goodies” and “Whistle (Beat It Up)” have a more delirious affect, off-kilter but twerk-ready, while “I Run This Club” aims straight for the club-hip-hop crossover sweet spot and lands it perfectly.
Bradshaw, who began rapping in 2011, and has released a handful of EPs and mixtapes while he attends Montclair State University, says he wants to take a page from the career of line-straddling artists like Missy Elliot, maintaining the sort of balance between lyrical and party-in-the-club hip-hop strains that she managed so well.
“I’m still lyrical, like any backpack rapper or underground rapper who will never make club music,” he says. “I just like to dance. The hip-hop turn-up moment is what I’m making.”
That backpacker vibe is evident on tracks such as the A Tribe Called Quest-evoking “Mussy Mayhem,” but a sample used on that cut reminds the listener that acceptance of an artist like Bradshaw wasn’t always a given. “Homosexuality is an enigma,” a voice explains. “Even in this era of bold sexual mores, it remains a subject that people find disturbing, embarrassing.”
Clearly Bradshaw’s sexuality is hard to avoid when listening to his music, rife with tales of his exploits. But that biographical detail can often overshadow the music in stories like this one, he explained on his way to a day of classes at the Red Bull Music Academy in New York.
“I definitely talk about sex a lot — I didn’t realize that until after I listened to my mixtape,” he says. “I was like this sex-crazed maniac. But that was just a testament to me being 21, writing songs in my dorm room.”
Writing about school finals isn’t going to be entertaining, he says. Lately his songs are more about traveling; he’s toured Australia, and Europe multiple times, and says that audiences there have adopted him more quickly than those at home.
“I have no problem talking about being an openly gay person,” he says. “Especially being a black man that went to college — I need to bring as much visibility to that, so young people can see. But for it to be the entire topic of the piece, how gay I am? Let’s talk about music. If you want to talk about the gay reference on the track, that’s a different conversation.”
“Keep It Coochie” would be a good place to start the musical discussion. It’s a showcase of his deft lyrical skills and creative beat-selection, with a swinging 1920s-era jazz sample at its core.